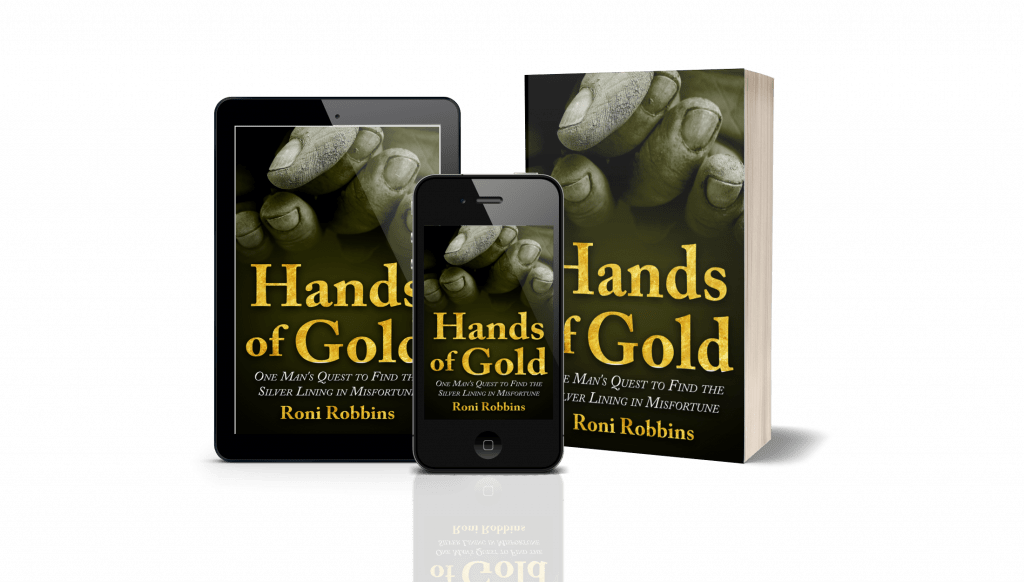 In 1995, three years after my grandfather departed and during my first stint at the Atlanta Jewish Times, I wrote a column about listening to his cassette tapes: “Giving Memories a Voice: My Grandfather Left a Piece of Himself Behind as a Legacy to his Progeny.”

Here is an excerpt from that article: “Surprisingly enough, the tapes are more comforting than sorrowful because they answer the questions I never thought to ask about my heritage in an uninhibited depth I could never even hope to capture, even if I interviewed my grandfather for hours. .. a legacy more meaningful than the typical family heirloom or obscure memories. He left a piece of himself that cannot be recreated for future generations through photographs or diaries.”

Hands of Gold took that sentiment a step further as I transcribed 450 minutes of tapes, duplicating the ones my grandfather created in his final years, and took liberties to move the stories in new, but related directions. With the twists and turns of the roads I traveled while listening to my grandfather’s words, his story took on its own life over the next few years and I let the words direct me as they pleased. I made connections in the text, found the symbols and metaphors I was seeking, and weaved his stories together like the garments he and my grandmother were known to sew.

Or how I described in the 1995 piece: “As I drive in my car around Atlanta, I literally listened to the words of my progenitor, instructing his descendants on the trials of human survival and the importance of family unity. Starting when he was 83, my grandfather embarked on a two-year effort to record his experiences, his retrospections, his beliefs.” I believe this novel more than fulfills my grandfather’s desires for “giving memories a voice.” And as I wrote in the conclusion of the AJT article: “The tapes make up for unsaid words and lost time. … I only wish more seniors took the time to impart such messages to those they will eventually leave behind.”

I also wrote a fake story in 1986 for my grandparents’ 60th anniversary that shows my interest in their history and hands, which I unwittingly incorporated many years later into the novel: “Her hands were not as young as they once were when she made shlishkas and veranikas for her five children in the 1940s, but they were still the same hands that crafted her granddaughter’s wedding dress … Those hands were the trademarks of a strong woman who cared for her family even when her husband was sick in the hospital and three young children needed food, clothes and schooling.”

Praise for Hands of Gold

The author carries us through the lifetime of a fascinating Jewish man who used his wonderful hands to survive. They also were filled with romance as he and his wife spent 6 decades together. The reader will look at his own hands and wonder out loud if they have been as energized as those of the hero. I, too, ask myself - how many special traits do my ten fingers possess? Robbins' book offers each of us our own personal answer.

David Geffen is an American-born historian, author and rabbi living in Jerusalem. His writing has appeared in such publications as The Jerusalem Post.

Author Roni Robbins weaves together a historic novel inspired by true events that is a page-turning credit to her literary talents. Her book Hands of Gold is a testament to her storytelling ability, a timeless treasure lost in the horrific tragedies of war, with a spirited main character who lived through one challenge after another. Robbins portrays the spirit of a man, though broken, who is memorable as he holds onto life, time and what truly matters most. An amazing book about resilience, worthy of your immediate attention.

Robyn Spizman is a media personality and an award-winning New York Times bestselling author who has written more than 50 books.

“Where are all your great miracles now?” the story begins, in the hoarse, wry, honest voice of the much-travelled, much-aggrieved Sam Fox, a Zelig of a fictional spinoff of the author’s grandfather. An Eastern European immigrant, born at the start of the new century – “My birth was not the greatest timing, I know. But who was I to question such a thing?” – he managed to taste, and to suffer, much of what midcentury America had to offer, from the golden age of TV & radio to a mass shooting at a workplace. A natural-born survivor, skipping across borders, changing identities, harboring secrets, Sam always made time to relish moments of happiness, always displaying — even when on the run, even when grieving his loved ones — a tremendous love of life.

Melissa Fay Greene a two-time National Book Award finalist, is the author of Praying for Sheetrock and The Temple Bombing.

Based on the lives of her immigrant forebears from Hungary and their American-born children, Roni Robbins has written an absorbing and richly detailed novel about the struggles and triumphs of people who made their way in the promised land of America during the last century. The novel traces the lives of the many members of the Fox family. The characters are vividly drawn and the novel contains many moving stories and episodes. One, in particular, that stands out in the mind of the reviewer involves the journey of Mo Fox to Europe in the wake of the Holocaust to retrieve a family heirloom that represents the title of the novel. Readers interested in learning much about the story of the Jewish immigrant experience in America will find Ms. Robbins' novel a richly rewarding experience.

Sheldon Neuringer is a retired history professor and published author of stories about history and Jewish life, including two novels about Jewish youths growing up in New York. He recently wrote a short story, “For the Love of Yiddish.”